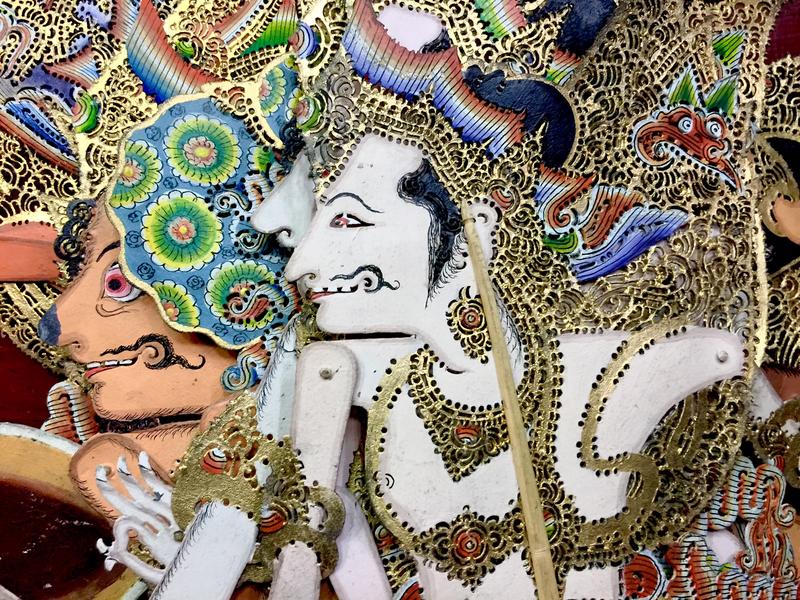 The wayang puppet show is perhaps the most famous show in Balinese theatre, albeit the most difficult to understand. Basically an epic narrative, it is the key to Bali’s unique world of myths, symbols and religious beliefs.

The puppet master, or dalang, tells his story by projecting the shadows of the puppets he manipulates behind a white screen and a large lamp. He plays several characters at once, shifting from Old-Javanese to High-Balinese, singing and hitting a box to mark the rhythm. A good dalang is a one-man-show, being in turns smart, funny and melancholic.

The dalang borrows the frame of his narrative from the great epics of the Indo-Javanese tradition, the Mahabharata and the Ramayana, although other stories may sometimes be used. He then creates his own episodes, usually concerning a hero’s quest for a magical weapon, heavenly secret or partner.

The hero, accompanied by buffoons, succeeds eventually after tortuous adventures in the wilderness and fights with evil giants. The two sets of puppets – the heroes on the right, villains on the left – symbolise the eternal struggle between good and evil. But for the audience, the dalang’s ability to poke fun at everyone through the mouths of the buffoons is no less important than the narrative.